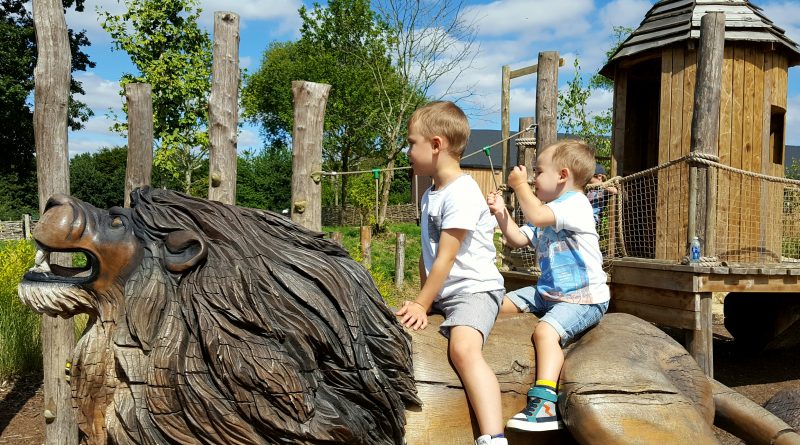 We’ve just got back from a fantastic long weekend South of the border, where we were staying for a few days attending a family wedding. The wedding was actually on the Monday so we travelled down on the Saturday with the intention of making a mini break of it. As Saturday was mainly travelling we wanted to make sure that Sunday was a day we could spend having some fun as a family and just around the corner from where we were staying for the first couple of nights was the lovely Marwell Zoologocal Park.

Situated on the edge of  the South Downs National Park, it’s fair to say that the best way to get there, if you’re using your Sat Nav is not to use Google’s pin for the park – it took us a couple of miles away around the back somewhere. Marwell’s website lists the post code SO21 1JH on their directions page and once established, this got us there no problem. Entrance was £19 for adults and £15 for children over 3 and that included an optional donation to the park to be able to gift aid and help the costs of running such a great place and caring for the animals. No problem and well worth it. 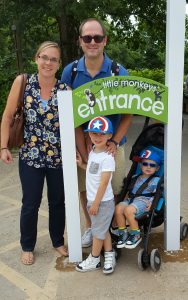 Also on the way in, just through the entrance is the information kiosk, where you can pick up one of the Zoo’s Lost Child stickers. There’s space on it for your mobile phone number – no names please – so that if your little one gets lost at any point you can be contacted and swiftly reunited. We got our boys stickered up but thankfully they weren’t called in to action!

It really is a lovely park, with acres of space for the animals, and your children, to roam – although not together! The pathways are so wide that, even though it was pretty busy, you’re not in danger of hitting any human congestion as you make your way around Marwell’s foot safari. 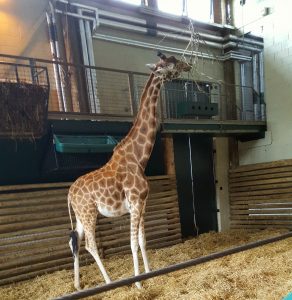 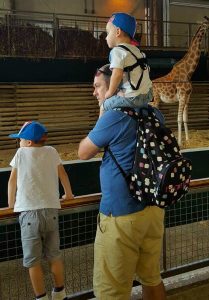 We’d arrived pretty soon after opening time (10am) so a lot of the paddocks were just coming to life or not quite ready but as we slowly meandered our way around the park we saw penguins, emus, the cheetah (who was still pretty sleepy, lazing under his tree), a few warthogs (cue mum and dad promptly leaping in to a Lion King rendition of “When I was a young wart hoooooooooooog!” and Hakuna Matata!), before we headed indoors to who probably became our universal family favourite of the day – the giraffe’s! It was clearly breakfast time for them when we got there so they were indoors eating, but still awesome to see and be near!

After the giraffe’s we moved onwards, via the land train, just one stop further on to the elusive, and apprently still sleepy, tigers. 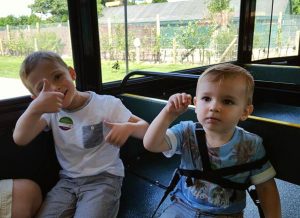 There was quite a crowd around the window closest to the sleepy spot so we moved on and the boys sampled their first of the park’s five adventure playgrounds.Situated right near the picnic hall and, as we found out later, the rhino hall, there was plenty of climbing, swinging and sliding to be done here for both our boys, although it was much more suitable for NJ. 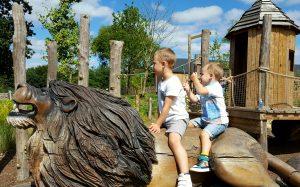 After playing here for a little while we headed across to the park’s main eating and watering hole, Café Graze. It’s fair to say that around lunch time it get’s pretty busy and hectic inside here. Luckily we had guessed that and got there before 12 noon. We found a nice spot on a table outside behind the café, with the boys having one of the children’s lunchboxes, Helen had a chicken noodle concoction and I had some salmon. It was all very nice and reasonably priced.

Moving around the park some more we saw some zebras, meerkats, a snow leopard, a red panda and macacques (one of whom J-Bubb kindly pointed to everyone nearby was in the process of poo-poo!), along with the very beautiful Marwell Hall (rumoured to be the place that Henry VIII married Jane Seymour, as it belonged to her family in the 1500s). 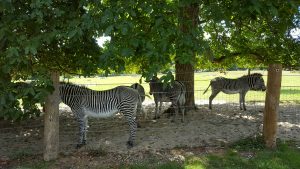 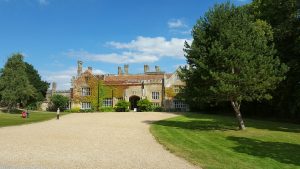 Our final stop, and one that we didn’t get any photo’s of, was an animal that NJ was very keen to see – the Rhino. Once we’d established where they were (they’d recently moved from their location on the maps) we went and saw them being moved around inside their enclosure before a couple of them ventured outside in to the first part of their paddock. This is a great paddock too as there is a safari truck that is used as a viewing platform, for which both our boys loved jumping in and pretending to drive around.

As this was our final spot to see we wandered back around towards the exit, noticing that a lot of the quieter paddocks were now full and it was a lovely opportunity to take our time and enjoy seeing the animals one final time. We even called in to say good bye to the beautiful giraffes before heading home after a really great dayt.

Zoos often get a bad rap, but there are quite a few wildlife park’s springing up now, like Marwell and Yorkshire Wildlife Park back home, that are creating a great experience for visitors, with wide open spaces for the animals and great landscapes for visitors. to marvel at. We had a lovely time here, Marwell is truly a lovely park and if you’re in the area, well worth a visit.

What’s your favourite Zoo/Wildlife park? HAve any of you been to Marwell before, if so what did you think? 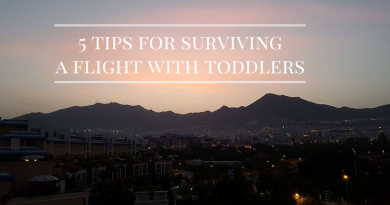 5 tips for surviving a flight with your toddlers 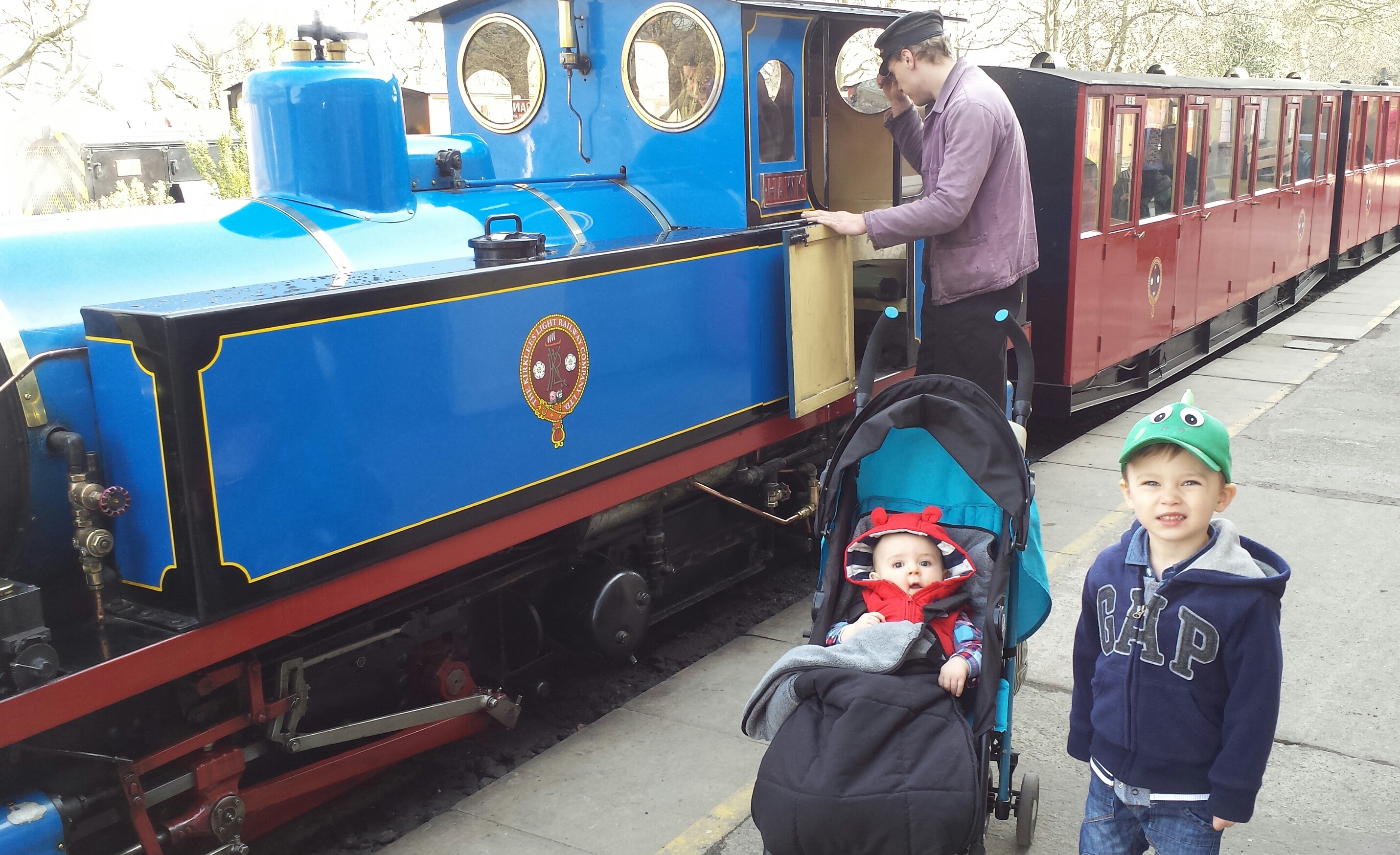 A great day out at Kirklees Light Railway